You are here: HomenextNew contributionsnextConstructing a 3D model of a local heritage object - the Fassaroe Cross 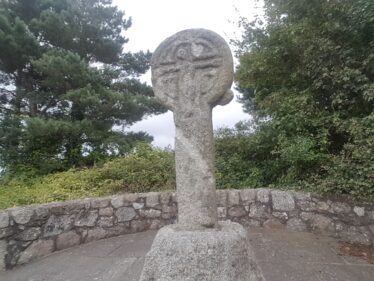 This post gives access to an online 3D model of a local heritage object, the medieval Fassaroe Cross, and documents the construction of the model.  The technology used was limited to a good quality digital camera and some standard software.  Though not perfect, the model provides good quality access to a heritage object in a more interactive manner than standard photography and is an approach that could be used more widely.

You can access the model by clicking on the button above.  It will appear in a new tab or window and there may sometimes be a slight delay while it loads.  The model is stored on Sketchfab, an online platform for 3D models used by, amongst others, Ireland’s Discovery Programme and some national museums.  It might be useful to read the following points to help view it effectively.

The Fassaroe Cross is a granite medieval cross about 1.42m high, also known as St Vallery’s Cross, with a circular head.  The front face has a depiction of Christ, represented as naked, with his head inclined to the right.  On the back of the head of the cross are two bumps that seem to have once been bearded human heads in relief, one possibly wearing a mitre.  You should be able to examine these by using the mouse to move around to the back of the cross and zooming in by double-clicking on the crosshead.  There are also two other heads, which are even more worn, one on the lower right hand side of the crosshead (when viewed from the front) and another on the left hand side of its base.  You should also be able to examine these using the navigation tools.

Ordnance Survey material from the 1830s suggest that other items were present at the site at that time, including a pedestal, font and, at some point, another cross shaft, suggesting the possibility of an ecclesiastical site.  Local sources are also quoted as suggesting that the cross was moved from its original position, which was possibly as far away as Ballyman, about a kilometre or so to the north.   The cross was also recorded as being a focus of local pilgrimage.  Archaeological test excavations carried out in 2002 adjacent to the cross failed to reveal anything of significance.

The cross is thought to date from between 1150 to 1200 AD and is one of five of similar design in the area.  The style is considered to have originated in Cornwall and the crosses are somewhat different in appearance from crosses from other parts of the country from the same era.  This local group of crosses is sometimes collectively known as the Fassaroe Crosses.  There is some further reading listed at the end of this post.

The model was constructed from about 150 separate photographs of the cross taken from different positions.  The photographs have a large degree of overlap so that the same point on the cross will appear in a number of different photographs.   This enables software designed for this purpose to work out where the camera was positioned in each case and what the cross looks like from these points and, indeed, using mathematical methods, what it would look like from all other points.  This enables it to construct a model in three dimensions that faithfully reproduces what an observer would see when viewing the object from different angles and vantage points.

The software package Agisoft was used to construct the model in this case but there are a range of such packages available on the internet, some free of charge, although to make a good quality model that can be displayed online some sort of payment will typically be involved.  The software is not difficult to use for someone with reasonable proficiency on a laptop or PC and who is prepared to read the guidance that is provided.  The process will work best if the photographs are taken in good light but without shadows.  Some practice may obviously be required to get the number and quality of the images right and tips on this are freely available on the internet.  There are a few surfaces which will cause serious problems, in particular, shiny reflective surfaces and large areas of similar colour.  In these cases, it may be difficult to make the process work well.