This post gives access to a 3D model of Raheenacluig church on Bray Head.   The Medieval Bray Project is grateful to Enda Lydon of Irish Archaeology Consultancy Ltd. (IAC) who constructed the model and to David McIlreavy of IAC for arranging it.  This post gives some guidance on how to access and use the model and then provides a very brief account of Raheenacluig, with links to other posts on this website which give many more details of its history and the results of our investigations.

You can access the model by clicking on the button above.  It will appear in a new tab or window and there may sometimes be a slight delay while it loads.  The model is stored on Sketchfab, an online platform for 3D models used by, amongst others, Ireland’s Discovery Programme and some national museums.  It might be useful to read the following to help view it effectively. 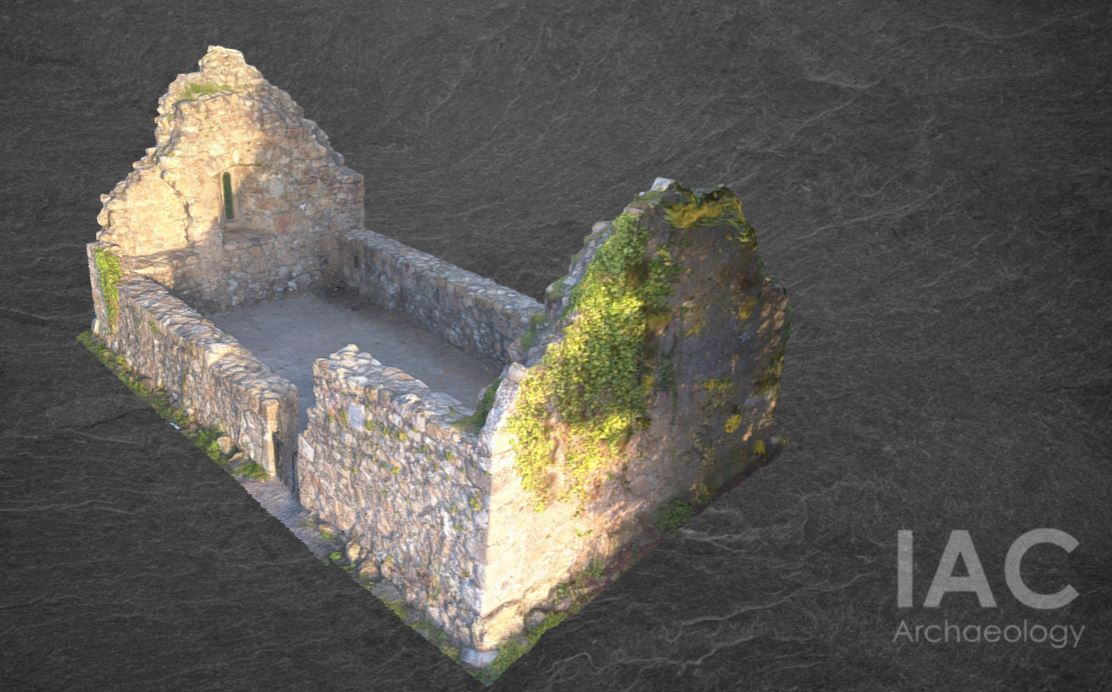 The building of Raheenacluig church can almost certainly be attributed to the Friary of the Augustinian Hermits in Dublin, a well-resourced religious institution in the city that was established in the mid-1200s.   The land on which the church was built on Bray Head was probably donated to the Friary by the Archibold family when they were granted lands in Bray in the late 1300s.  The majority of Raheenacluig’s structure seems to date from about that time, although the eastern window (on the left in Figure 1) could be an earlier feature, possibly from the 1100s, perhaps deliberately installed when the church was built.  Geophysical surveys conducted by the Medieval Bray Project and some documentary evidence suggests that the church may have been surrounded by a small medieval hamlet or ‘villate’.

Excavations by the Medieval Bray Project revealed that the site and the church was repurposed in the late 1600s, with tenants being introduced by the Edwards family who had taken over from the Archibolds as landlords in this area.  The archaeological evidence suggests that the then ruined church structure was reroofed in fashionable ‘pantile’ roof tiles and that there was domestic furniture in the structure at that time, which was of a relatively comfortable standard.  The last phase of activity at the site was when work was carried out to stabilise and conserve the remaining structure in the 1920s and 1930s by officials of the Office of Public Works and the emerging National Monuments Service who took over its care at that time.

You can read more about Raheenacluig in the following posts –

Preservation and restoration at Raheen-a-cluig church

The most comprehensive non-technical summary of the investigations at Raheenacluig is contained in ‘The Medieval Bray Project: investigations at Raheenacluig church, Newcourt, Bray, Co. Wicklow’ by David McIlreavy in ‘Partnership and Participation: Community Archaeology in Ireland’, edited by Christine Baker and published by Wordwell, Dublin, 2020.