You are here: HomenextPeoplenextThe O'Tooles - a Gaelic lordship on the edge of the Pale

The O'Tooles - a Gaelic lordship on the edge of the Pale

Wicklow’s mountainous landscape allowed an island of Gaelic society to persist throughout medieval times and to regularly threaten Dublin and its Pale.  The Gaelic families that exercised most influence and power in the area during medieval times were the O’Byrnes and the O’Tooles. This short article gives a broad overview of the history of the O’Tooles, the Gaelic lordship closest to Dublin.  A similar post on the O’Byrnes is also available.  These posts are intended as introductions, short pieces that might tempt you to read a bit more.  Broader histories are available in the further reading noted below.

Before the arrival of the Normans in 1169, the ancestors of the O’Tooles lived on the rich lowlands of what is now county Kildare.  They were referred to as the Uí Muiredaig, the descendants of Muiredach, who died in 760 and was a brother of Fáelán, founder of the Uí Fáeláin, the ancestors of the O’Byrnes.  The two families were, therefore, connected not just by later alliances and marriages but by blood.  This may explain why, despite occasional tensions, they co-ordinated their actions so closely throughout later medieval times. 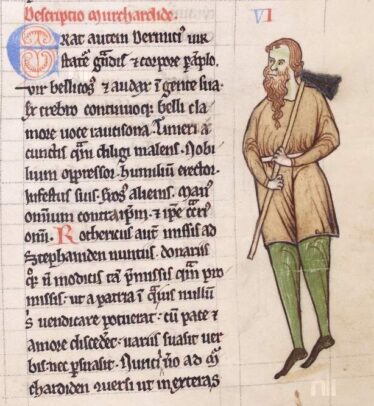 The Uí Muiredaig, like the Uí Fáeláin, provided Kings of Leinster at various stages.  One of the these was Tuathal Mac Augaire, who died in 958, and it is from this Tuathal that the Uí Tuathail (or O’Tooles in English) derive their name.  The personal name Tuathal occurs elsewhere in Ireland and stretches back into antiquity.  It was probably originally descriptive, perhaps meaning ‘ruler’ or ‘prosperous’, although this is unclear.  The most famous Uí Tuathail from this era is  Lorcán Ua Tuathail, better known as St. Laurence O’Toole, Abbot of Glendalough and Archbishop of Dublin, who was supported in his career by Diarmuid Mac Murchada (Diarmuid MacMurrough), the King of Leinster (see Figure 1).   Diarmuid was subsequently deposed and, in an effort to restore his kingship, triggered the first Anglo-Norman incursion by seeking their assistance. 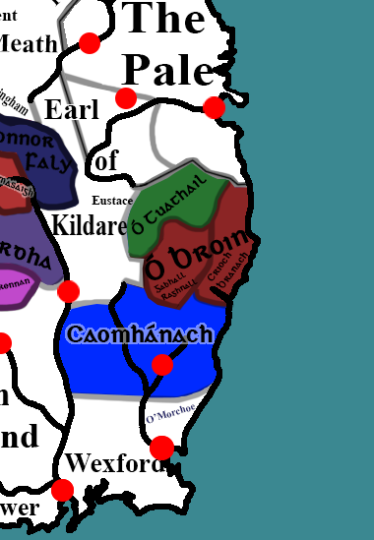 As the Normans advanced, Gaelic lords living on good lands, including the O’Tooles and the O’Byrnes, were forced to retreat into poorer areas.  Some of O’Toole lands in Kildare were granted by the Norman leader, Richard de Clare (‘Strongbow’), to Walter de Ridelesford, the same man whose family founded the medieval manor of Bray.  Having retreated into the Wicklow mountains, the O’Tooles occupied an area that had once been the base of the Uí Máil group, from whom the Glen of Imaal (Uí Máil) gets its name.  Both the O’Tooles and O’Byrnes suffered a loss of status for a time following their exodus from Kildare but they gradually managed to re-establish themselves, the O’Tooles dominating the north and north-west of the Wicklow mountains (in green in Figure 2) and the O’Byrnes the east and south (in red in Figure 2).

In the early to mid-1200s, there are indications that some of the O’Tooles were being drawn into the Norman fold.  A number adopted Anglo-Norman first names such as Walter, Richard and Robert.  They were also recipients of grants of land, including from the then Anglo-Norman Archbishop of Dublin.  But, if there was some initial trend towards assimilation, it did not last.  By the 1270s, the O’Tooles had re-established themselves in an old-style Gaelic lordship and they, along with the O’Byrnes, had begun a pattern that would last for centuries, raiding the surrounding lands, some of which had been their own, and holding out against any forces sent to control them.

The O’Toole lordship was somewhat smaller than the O’Byrnes’ and less favourably positioned (see Figure 2 above).  The O’Byrnes’ domination of the eastern side of the mountains allowed them, over time, to establish more permanent control, direct or indirect, over good land along the east coast running south from Delgany to Wicklow and Arklow.  It also allowed them to extract a form of tribute, so-called ‘black rent’, from the towns of Wicklow and Arklow.  The O’Tooles were squeezed between the O’Byrnes and areas that were closer to Dublin, where it was more difficult to establish lasting control over better land.  They also, to some extent, shielded the O’Byrnes, as military expeditions sent from Dublin generally entered their lands first.

In medieval times, areas were classified as being either in the ‘land of peace’ or the ‘land of war’.  The ‘land of peace’ consisted of settled areas not subject to regular raiding.  Outside of this was the ‘land of war’, or the ‘March’, disputed lands, which had often been granted to settlers, with castles, villages and fortifications subsequently erected on them, but which were constantly being raided by the dispossessed Gaelic clans (see Figure 3). 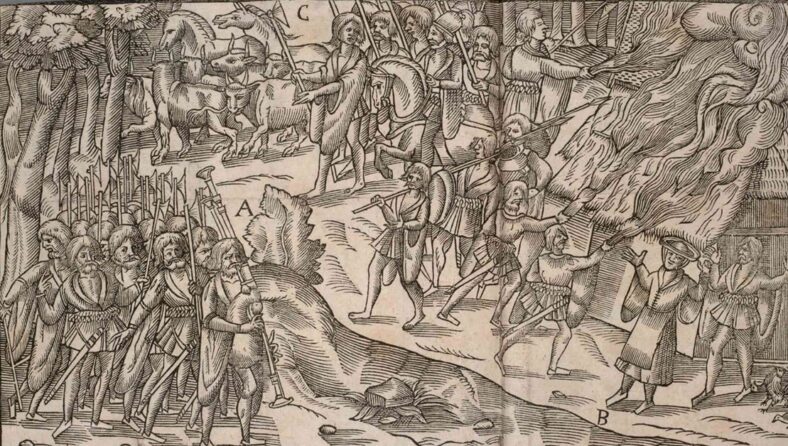 Figure 3: Depiction of a raid by dispossessed Gaelic clans, from ‘The Image of Irelande’ by John Derricke, 1581

The areas that constituted the ‘land of war’ changed over time.  Initially, the Norman incursion into Wicklow succeeded in penetrating quite far, with Castlekevin (near Glendalough) and Newcastle Mackynegan (modern Newcastle) being key fortifications, but this was rolled back during the 1300s and 1400s.  As the Gaelic lordships recovered, these sites were captured, Castlekevin becoming a centre for the O’Tooles.  Areas closer to Dublin also came under regular attack, such as Tallaght, Clondalkin, Rathcoole, Bray and Shankill.  At times, the very existence of the Pale seemed under threat.

In the summer of 1396, the Irish annals record an O’Toole victory ‘over the Anglo-Irish and Saxons of Leinster, in which the English were dreadfully slaughtered: and six score (of their heads) were carried for exhibition before O’Toole, besides a great many prisoners and spoils of arms, horses and armour’.   The display of heads was standard practice on both sides (Figure 4).  In 1402, Henry IV’s Irish Council informed him that ‘The English marchers are not able, nor are they willing to ride against them [the Irish] without stronger paramount power…the land is in danger of final destruction’.  There were, of course, successes on the government side, such as the Battle of Bloody Banks at Bray in 1402, but these were not decisive and by 1515 a report noted that only half of what is now County Dublin was subject to the king’s laws and all of Wicklow was firmly in the ‘land of war’. 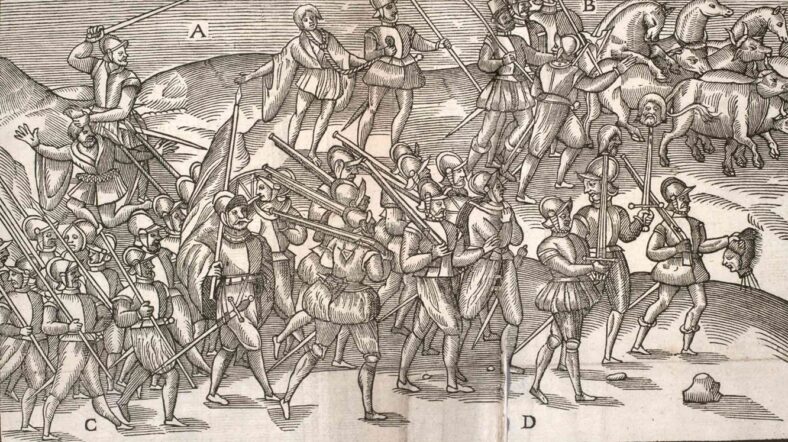 Figure 4: English soldiers with heads of defeated Irish, from ‘The Image of Irelande’ by John Derricke, 1581

Division in the lordship and its eventual demise

From about 1445, the O’Toole lordship split into three principal areas, Fercullen, Fertire and Imaal.  Fercullen occupied the very north of what is now County Wicklow, including Enniskerry, Powerscourt and the Sugar Loaf down to the Glen of the Downs, where it met the O’Byrne lordship.  South of Fercullen, but inland from the O’Byrnes was Fertire, stretching all the way to Glenalough and a little beyond.  Imaal was to the west of Fertire, including the Glen of Imaal and the western slopes of the Wicklow mountains.

The government’s approach to bringing Gaelic areas under control varied between outright war and subtler methods intended to convert Gaelic lords into loyal subjects.  The most well-known of the latter was ‘surrender and regrant’, a policy initiated in the 1540s and which began with the O’Toole lordship.  Turlough O’Toole, the then chief, spent several months in England in 1541, where he met and submitted in person to Henry VIII.  In return, he was granted back his lands, with conditions and on payment of rent to the king.

The result was not clear-cut, however.  An emboldened Turlough tried to gain full control of the decentralised lordship but was killed by the Imaal O’Tooles.  His eldest son Turlough Oge succeeded him but was also killed.  There was then a split between two of Turlough’s other sons, Brian, supported by the English, and Phelim, recognised as the O’Toole chief in the Irish annals.  In the short term, there was no violent dispute and Brian even served as the Sheriff for County Dublin in 1545, but the calm did not last.

Phelim O’Toole appears again as a close ally of the O’Byrnes during the so-called Baltinglass rebellion, which included a famous victory over government forces at the Battle of Glenmalure in 1580.  The leader of the O’Byrnes, Fiach McHugh O’Byrne, was married to one of the O’Tooles and very significant resources were committed by the O’Tooles to the rebellion. The O’Byrnes and the O’Tooles were ultimately defeated militarily in the years that followed, although a weary government allowed them to retain much of their possessions.  Their lordships were effectively dismantled, however, with English garrisons scattered through them and, apart from a brief resurgence in the rebellion of 1641, the O’Tooles never recovered their former dominance.

The influence of an O’Toole reaches across 850 years? 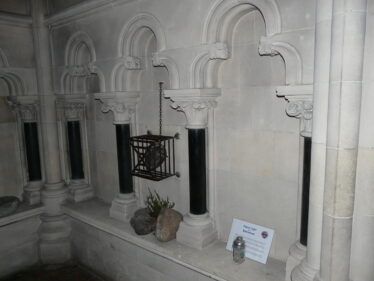 Despite all the warfare, the most remembered O’Toole today is probably a man of peace and canonised saint, Laurence O’Toole.  He died in France in 1180, apparently on his way to meet Henry II.  His heart was preserved in a reliquary in Christ Church Cathedral and remained there despite the Protestant Reformation (see Figure 5).  The heart was stolen in 2012 but was unexpectedly returned to the cathedral in 2018.  The thieves apparently believed the theft had left their family cursed.  You can read more about the saint and this unusual theft in this online History Ireland article.  You will discover that the modern thieves were apparently not the first to feel cursed!

You can read more about the O’Tooles in the following –

You can also read more about the links between the Uí Muiredaig/O’Tooles and Glendalough  on the website of the Glendalough Heritage Forum.

The images by Giraldus Cambrensis and John Derricke shown in this post were not necessarily unbiased observations, Derricke, in particular, was working for a relative of the Lord Deputy and Giraldus Cambrensis is often viewed as trying to provide a justification for the Norman invasion.