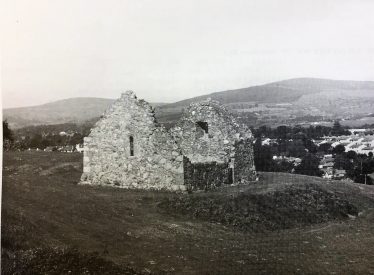 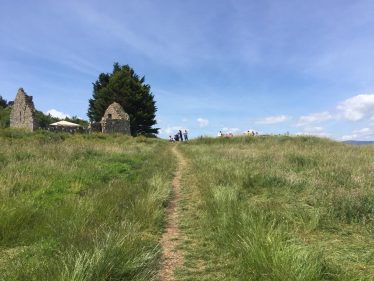 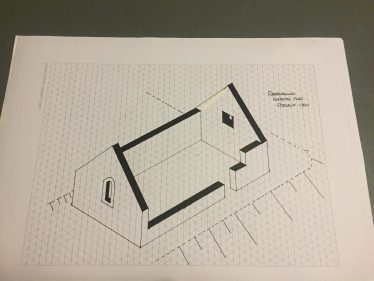 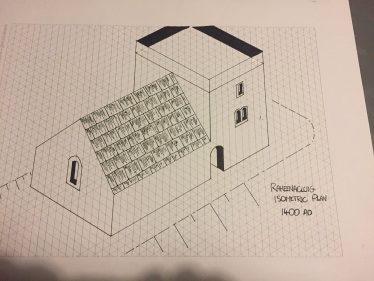 Whilst little is known about the early history of the church and its environs, Liam Price and others identified the building within the possessions of the Friary of the Augustinian Hermits of Dublin (the Friary).

Although no contemporary accounts of the Friary exist, an 18th description notes that it was ‘a very significant foundation’, consisting of a church with bell tower, a dormitory, a hall, a cemetery and garden, covering an area of one and a half acres.

What did the Augustinian Friary hold

At Raheen a Cluig, the Friary held 51 acres broken down as 30 arable, 20 pasture and one meadow, with five  attached messuages; valued at 13s 4d. The Friary holdings at Raheen a Cluig, when compared to their other holdings was a significant estate, which amounted to much of the former townland of Raheen a Cluig (the church) which was held by:-

In terms of the acquisition of this estate by the Friary it is suggested that the Archibold family may have been the primary donors. The date of this donation is not recorded, but an AD 14th century date may be suggested.

This assertion is based on notes in the Arthur Flynn book in 2004 stating that the Archibold family were granted the manors of Bray and Kilruddery by the Edward III. The family name Archibold is associated with Kilruddery until AD 1399.

After the dissolution of the Friary of Augustinian Hermits in Dublin, the possessions of the Friary were leased to lay landlords and in May AD 1541 a Dublin merchant, Robert Casey, was granted a lease of the lands for an annual rent of £6 0s 9d. The following year on the 15 June AD 1542 they were granted to ‘Robert Eustace and others, to the use of Thomas Lutrell of Luttrelstown’ (ibid, 211). By AD 1641, a James Archibold is recorded as the owner of the church and lands, although he forfeits these by AD 1670.

The lands of the church seem to have abutted those of Kilrotheri, encompassing the Little Sugar Loaf, Bray Head, and the present lands of the Kilruddery estate between them. The area of Kilrotheri belonged to Abbey of St. Thomas the Martyr in Dublin. Therefore between the estate of the Friary of Augustinian Hermits at the church, and that belonging to the Abbey of St. Thomas the Martyr, there was a substantial monastic presence on the southern slopes of Bray Head.