You are here: HomenextTopicsnextSmall finds help to the tell the story of Raheen a Cluig 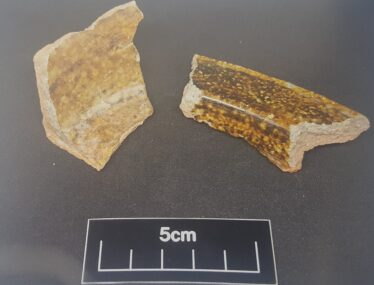 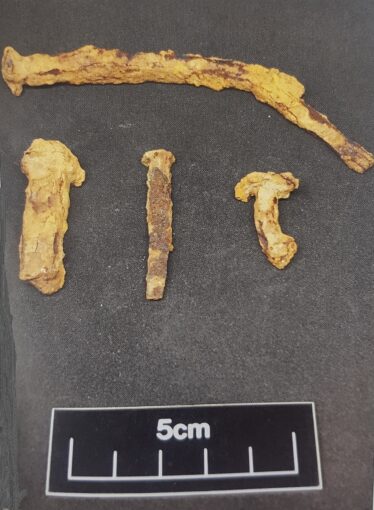 The Medieval Bray Project undertook excavations at Raheen a Cluig church on the slopes of Bray Head during Heritage Week in 2017 and 2018.  As well as evidence about the larger structures at the site, some interesting small finds were made.  Partly based on these small artefacts, the current thinking is that the medieval church on the site was repurposed as a house sometime around 1670.

Several pieces of ‘pantile’ roof tiles were found in the excavation, see Figure 1.  These were quite fashionable roof tiles used in the late 1600s and early 1700s.  This suggests that the church may have been re-roofed at this stage and probably used as a substantial house, given the other finds.  This may have happened after the Edwards family replaced the previous Archibolds as landlords and introduced new tenants around 1670.

Two pieces of ceramics found dating from the late 1600s are shown in Figure 2, a piece of North Devon Gravel-Free Ware on the left and North Devon Gravel-Tempered Ware on the right.  These were originally parts of large hollow vessels of some kind.  Other ceramic items found dating from the same period included some pieces of Tin-Glazed Earthenware, Manganese-Glazed Ware and Staffordshire-Bristol Ware.  Most of these finds were probably parts of a jug, a mug or a ‘tyg’, i.e. a large drinking cup with two or more handles.  These items would probably have been imported through the port of Dublin in the late 1600s.  In all, pieces from at least six separate ceramic items were found.  This a significant concentration of ceramics and points towards the use of the structure as a house in the late 1600s and early 1700s.

A range of nails and furniture tacks were also unearthed.  In Figure 3, the nail at the top and the one on the bottom left are both structural nails. i.e. for large pieces of timber.  The centre nail on the bottom is probably for securing floorboards and the one on the bottom right is a furniture tack.  While it is not possible to date these iron items directly, they were found in the same archaeological context (i.e. the same deposit) as the roof tiles and ceramics.  This suggests that they are also probably late seventeenth-century.  Perhaps a new floor was put in at this time, along with the new roof and some new furniture?

Pieces of clay pipe bowls were also found.  These probably also date from the late 1600s, based on their design.

There were other finds from much earlier and later periods.  The discovery of some chert artefacts indicates prehistoric activity in the area.  Chert is a hard stone that was used to make stone tools with sharp edges in prehistory.  A scraper and a piece of ‘debitage’, i.e. something thrown away in the process of making the tool, were found.  This is unsurprising as previous excavations nearby have shown the presence of similar flint artefacts and, therefore, a prehistoric population.  These pieces cannot be dated very precisely but they probably come from the late Neolithic or early Bronze Age, i.e. 3000-2000 BC.

Ceramics from the nineteenth and twentieth century were also found.  The most likely source for these is probably outdoor dining, as Bray became a tourist destination following the introduction of the railway in the 1850s.   The most recent find of note was probably a George V 1936 silver shilling.  From its positioning on the site, this coin was deposited during attempts to reconstruct the side walls of the building around that time.

You can read more about the excavation on this website and in the publication mentioned below.  Some of the historical background to Raheen a Cluig is covered in another post on this site and images from the excavation are also available.  The draft final excavation report is also downloadable from the link below.