Establishing the history of the ruined medieval church at Old Connaught (see Figure 1 below) is far from straightforward but the following is an attempt to sketch what we know, based on historical documents and what remains of the structure.

The first possible reference to a church in this area goes back to 1179 (Cantwell, 2005) but it is unlikely that it relates to the current ruined structure at Old Connaught. The ruins appear to be more typical of a late medieval parish church (Corlett, 1999, p. 138) and, in any case, Cantwell’s reference is to a ‘Celltuca’. This more likely refers to Kiltuck Church (Corlett, 1999, p. 137), whose rather faint remains are located closer to Shankill. It has also been suggested by another well-known author, Francis Elrington Ball (Ball, 1902, p. 120), that Old Connaught church may have been called Dervau in medieval documents. Dervau was given by Walter de Ridelesford, a leading knight in Strongbow’s forces in 1169, to the Convent of Grany in County Kildare in the late 1100s. It is possible that this could relate to a church on the site at Old Connaught but, again, the remains themselves appear to be later in style and there are other churches that might better fit the bill such as St. Paul’s in Bray.

More promising, however, are documents compiled for Archbishop Alen of Dublin who died in 1534. These include earlier sources which refer to a rector of ‘Konagh’ in the year 1349 (White, 1941, p. 203). This rector is likely to have had a church, probably a stone structure. It is even conceivable that some part of the existing structure at Old Connaught dates from this time, although most of it seems to be of later origin. Equally, his church could have been on this same site but was subsequently replaced. A church at ‘Connagh’ is, however, referred to in these same documents in relation to the years 1529-1534. Interestingly, the church is not listed as a standard parish church, but as one of eight ‘other’ churches that were ‘proprietary’ to the Archbishop of Dublin and are referred to in documents relating to the ‘Titles of Archbishop Alen’ (MacNeill, 1950, p. 286).

More solid evidence from the 1600s

The next reference to a church at ‘Connogh’ is in the visitation of 1615, which was effectively an inspection of the diocese (Ronan, 1941b, p. 43). The church is noted as being in good repair but, quite shortly afterwards, it is described in another survey in 1630 for Archbishop Bulkeley, as being ‘ruinous’ and attended by just fourteen poor labourers (Ronan, 1941a, p. 85). This report, like the previous visitation, was a post-Reformation document and it records more details about the area. These include the fact that the local Catholic landowners, the Walshes, were well-known for aiding and abetting priests and allowing them to say Mass in their house. The Walshes also maintained one Garrett Warren, a ‘popishe schoolmaster’, in the ‘town’ of ‘Connagh’ to teach the principles of Catholicism (Ronan, 1941a, p. 85). This illustrates the religious tensions of the 1600s and the fact that the Reformation was not making headway in the area at that time.

Old Connaught church seems to have succumbed entirely in the troubled mid-1600s, with Church of Ireland records showing that the last curate of Old Connaught was one Ralph Foxwith, who was appointed in 1647, in succession to Thomas Davis (or Davys), the curate at the time of Archbishop Bulkeley’s report in 1630. These are the only two names of clergy available from the records, which also show that Old Connaught was merged with Bray following Ralph Foxwith’s tenure. The Civil Survey of 1654-56 records the holding of one Thomas Walsh at ‘Connogh’ as containing ‘the Walles of a parish Church’ (Simington, 1961). This suggests that the church was unroofed by the mid-1650s and has probably not been used for divine worship since then.

The two churches of Old Connaught in the 1700s

In the 1700s, there were, in fact, two churches in Old Connaught, the second being located at the start of the Ballyman Road as it leaves Old Connaught. Both churches can be seen circled in red on the map compiled by Rocque in 1760 (Figure 2 below). This second structure, termed a ‘chaple’ by Rocque, was a Roman Catholic church which was demolished around 1800. It was replaced by a church at Crinken, which was subsequently replaced by St. Peter’s Church in Bray (Goodbody, 1998). Nothing of significance remains of this structure and it is not possible to say exactly when it was constructed. Its very existence, however, reinforces the impression given in Archbishop Bulkeley’s report of 1630 that much of the local population continued to adhere to Catholicism after the Reformation. 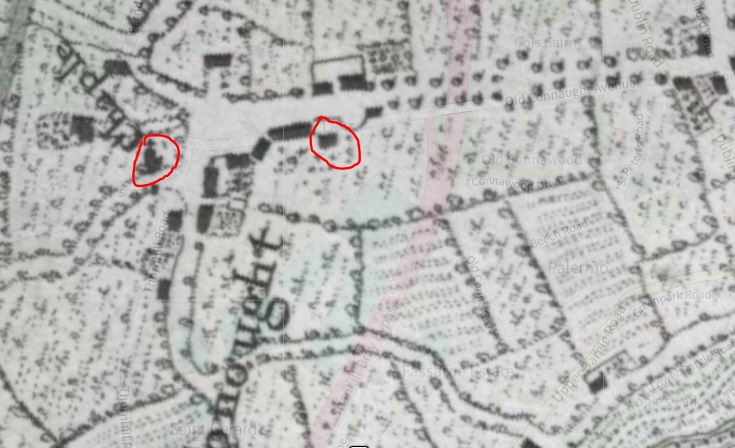 The graveyard around Old Connaught church contains many old burials. The oldest that can be easily read is from 1719 and is that a Hugh O’Neale (Figure 3 below). This is evidently a reused headstone, however, as a previous inscription, which is now upside down at the base of the stone, can also be clearly read and is from 1661. Re-use of headstones was not uncommon at the time. The absence of inscribed headstones with earlier dates than this is not that significant, as most graves of ordinary people would not have been marked in this way prior to the 1700s. It is unlikely, for example, that the fourteen poor labourers referred to in Archbishop Bulkeley’s report of 1630 would have had gravestones erected for them when they died. The use of wooden or iron markers would have been commonplace and the number of remaining headstones in the graveyard cannot, therefore, be taken as any indicator of the actual number of burials. 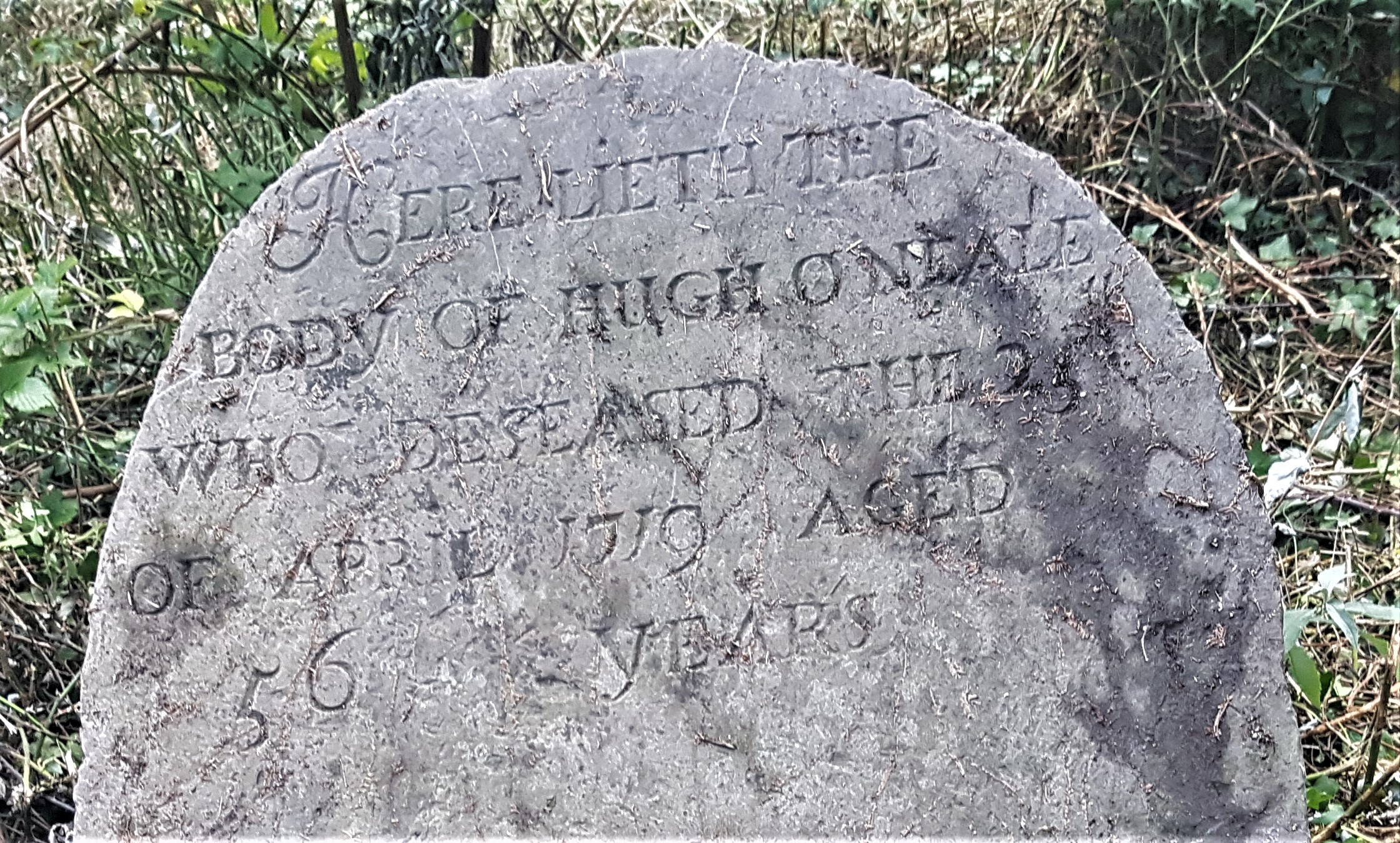 Figure 3: This gravestone from 1719 was previously used for a burial in 1661, as revealed by an inscription at the base which is now upside down.   The Medieval Bray Project

In summary, it seems that the church at Old Connaught was probably built sometime in the late medieval period. It appears to have been in existence and fully functioning in the early 1600s but it is clear that it did not survive as a place of worship past the mid-1600s. How old the church already was in the early 1600s is difficult to assess. It seems possible that it was essentially the church referred to in Archbishop Alen’s documents from around 1533 or an updated version of this structure. It is even possible that parts of the structure could go back as far as the time of the rector of Konagh referenced in 1349, although this is a conjecture. The site itself could also be older still and may have had an earlier church of some sort on it but, unfortunately, this will be difficult to establish at this stage.

Thanks are due to Brian White (Bray Cualann Historical Society), Rob Goodbody (Author and Historian), Christiaan Corlett (National Monuments Service) and the Church of Ireland Representative Body Library for inputs into this post.