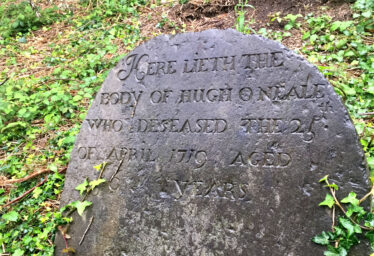 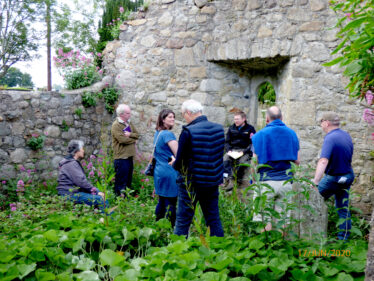 zoom
Old Conna/Connaught Graveyard Volunteers and interested parties listening to short history of the graveyard given by David McIlreavy.
The Medieval Bray Project 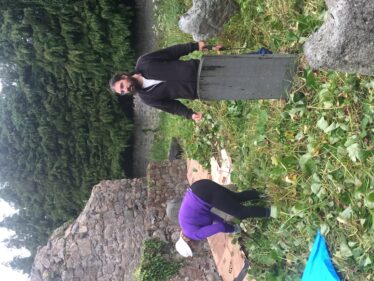 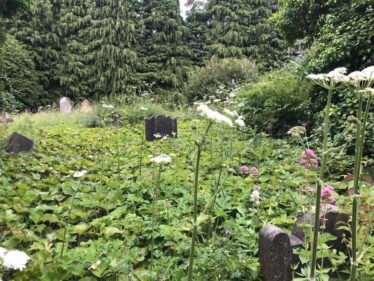 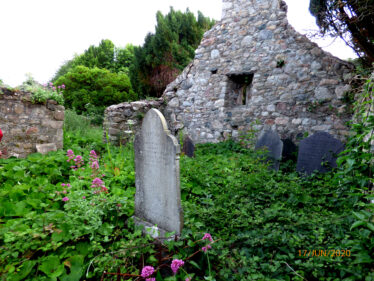 zoom
Overgrowth inside the church.
The Medieval Bray Project 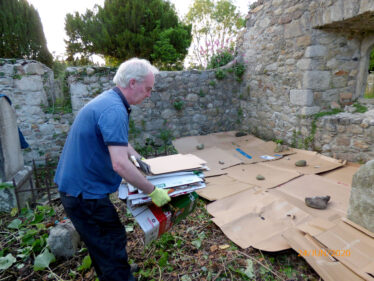 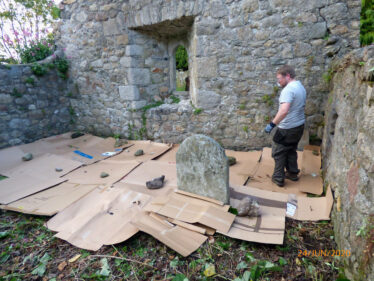 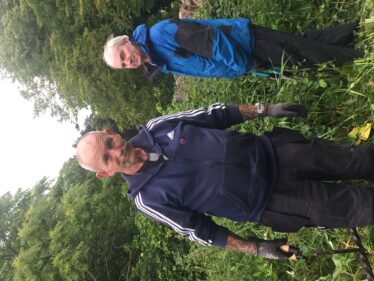 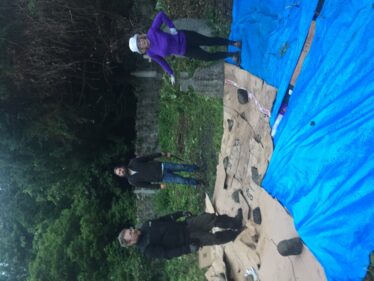 The inscriptions on the headstones in Old Conna/Connaught graveyard were recorded by Brian J. Cantwell (Cantwell) in 1978 as part of a larger project. Permission to reproduce this information has been given by his son Ian Cantwell. This information is also available on CD through Eneclann entitled Brian J. Cantwell’s Memorials of the Dead.

Cantwell’s introduction states that apart from the headstones with obvious inscriptions, there are a large number of simple iron and wooden crosses and concrete headstones which have lost their engravings and lettering. This information has been lost through “age and wreath ring”.

In 1978 when Cantwell recorded the inscriptions and when the graveyard was cleared of “unsightly shrubs and overgrowth by Dublin Co.  Co., sunken memorials were lifted and reset in their original positions.

Short History of the Graveyard

Cantwell stated that the earliest reference to Old Conna/Connaught was found in Archbishop Allen’s Register c 1172 – 1534, Royal Society of Antiquaries (Editor Mc Neill) which mentions Old Conna/Connaught (Celltuca – Kiltuc in Shanganagh Castle grounds) as being one of the parishes of the diocese in 1179.

Lewis in the Topographical Directory of Ireland in 1837 states that the parish belonged to Miss Roberts who resided at Old Conagh (sic) Hill.

F.E. Ball in his “A History of the Co. Dublin, part 3 (1905) gives useful information on the subsequent history of the lands.

A History of the County Dublin

Also Canon Scott in his “Stones of Bray” 1913 quotes from Ball’s work and has included some additional information.

Some Headstones of Interest

While there are headstones relating back to the 18c and 19c there are also more recent ones to be found. The oldest date is 1661 which is upside down on the O’Neale headstone.

A list of the headstone inscriptions in Old Conna/Connaught as at 1978.

Currently the Medieval Bray Project (MBP) volunteers are clearing out the weeds in the church space with a view to possibly reinstating the gravel interior and also gravelling the walkways to allow access to the rest of the cemetery (in time).  Our volunteers are working to control the weed growth at Old Conna/Connaught Cemetery after which we hope to refashion some of the grounds to allow for the gravestones to be seen. MBP are also examining which wildflower plants may be appropriate for the graveyard areas in which we are working.  This examination is being conducted under the guidance of John in Deansgrange, Tom Curtis and Aoife Munn. As at time of going to press on 4th July we have carried out three nights work. A big thank you to all concerned including Conor, Una, Luke, Maurice, Therese and Roger’s family.  As at the middle of October 2020, weeds have been suppressed within the church’s interior and along the main entrance pathway, weed barrier has been laid in the church and will be laid on the pathway.  Pending the COVID climate the gravel which has been ordered will be  delivered and laid hopefully before the new year.

It is sincerely hoped that the number of people who have responded to our posts on Facebook stating that they have family members buried in this cemetery will continue to keep an interest in the progress being made in planning for access to the graveyard when appropriate.  It is also our plan to involve some local schoolchildren in the execution of some artistic representations of selected gravestones.  MBP plans to survey and execute drawings of the medieval church with the involvement of the Office of Public works and the Dunlaoghaire Rathdown Cemetary department.