You are here: HomenextPlacesnextMaking heritage more accessible with the latest technology

While no substitute for visiting a heritage site, the latest cutting-edge technology can be used to provide both a visual experience and a source of information for people who may never be able to visit a particular site.  One of the main ways of doing this is through the construction of 3D models and 3D virtual tours that can be accessed online.

This technology has been widely used in some sectors up to now, in particular, real estate and hospitality, but is only now being fully utilised in the presentation and interpretation of heritage.  A pioneering project in this respect is the recent creation of a 3D virtual tour of St. Doulagh’s Church on the Malahide Road in Dublin.  It is the oldest stone-roofed church in Ireland that is still in use.  The creation of the 3D tour was the brainchild of ‘Resurrecting Monuments’, a community archaeology group, in association with the Friends of St. Doulagh’s, supported by Fingal County Council (Fig. 1).  You can access the tour through this link to the Resurrecting Monuments website. 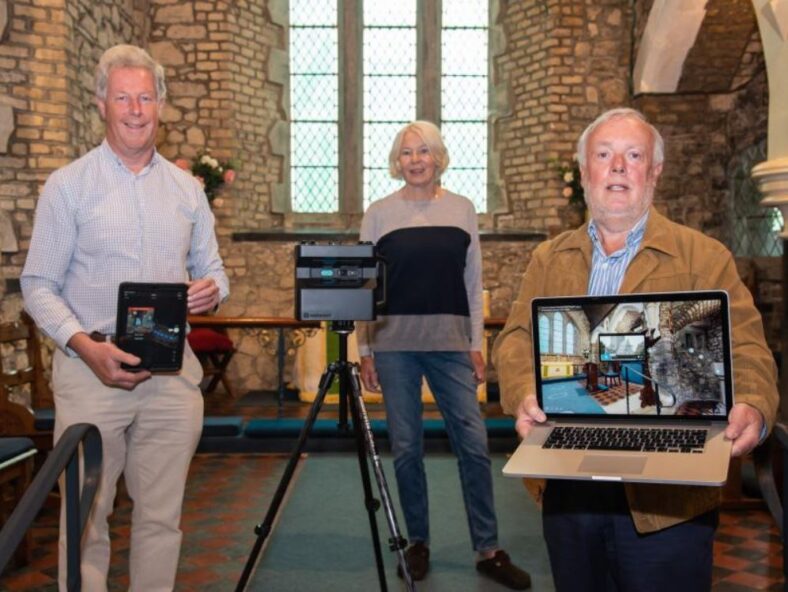 How does the technology work?

In essence, the technology works by piecing together a very large number of individual images of the interior and exterior of the structure.  The images have to have a high degree of overlap and are taken from a range of different locations and angles.  Specialised software can then be used to identify the same features in different images and work out where the images were taken from and what the structure would look like from these points and indeed, other points.  As a result, the software can come up with a full 3D model.  The quality of the model depends on a range of factors, including the definition and clarity of the images.

This type of model can provide an experience that is quite different from looking at photographs or a simple video tour.  First, you can choose your location and move about at will, as if you were really present, and not just follow a set route.  Second, the images give a more immersive feel, for example, if you move or look in a different direction then your view of individual objects will change in exactly the same way as it would in reality.  Additional information can also be embedded in the model at different locations in the form of ‘hotspots’, where you can click on an icon to access extra material.  The 3D tour of St. Doulagh’s is a sophisticated professionally-produced creation that encompasses all these features.

The start of a possible journey for the Medieval Bray Project

It is possible to produce less sophisticated 3D models using more basic technology, such as a standard digital camera and software which can be purchased on the internet.  This more basic ‘photogrammetry’, as it is termed, can be used to produce a less elaborate but still useful 3D model.  In an initial step into this field, a large number of photographs of Raheenacluig Church (see Fig. 2 below) on Bray Head have been taken by the Medieval Bray Project in an attempt to build one of these more basic models and bring Raheenacluig to life for those who cannot easily visit it. 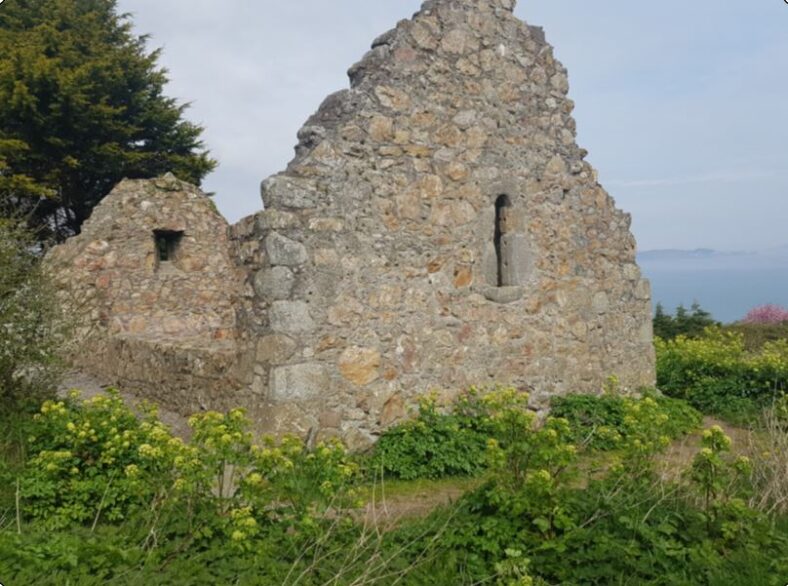 Images of an initial 3D model of Raheenacluig Church produced using these methods are shown in Figs 3 and 4 below.  (The faint lines and spheres in the images are part of the 3D software.)  Even as it stands, this has the potential to be viewed interactively, i.e. with the viewer choosing their own perspective and moving around it, but more work is needed to improve its quality before making it generally available in this form.   In particular, it is difficult to accurately model the tops of walls, as there are either no convenient vantage points from which they can be photographed or, as in this case, because trees and other vegetation obscure parts of the structure.  The use of a drone, if it were possible to arrange, would help but would not be a complete solution given how close some large trees are to one end of the church (see Fig. 2 above).

Public bodies, including the Discovery Programme in Ireland, have used more advanced versions of this approach to create models of heritage objects and structures and made them available for viewing online.  A good local example is the model of St. Kevin’s Church in Glendalough.  The National Museum of Ireland also provides virtual tours of some of its own exhibitions.  The latest tour of St. Doulagh’s church goes somewhat further, however, as it combines the ability to move outside and inside the building, between and around floors, and provides significant additional information at various ‘hotspots’.  There are also potentially downloadable models of smaller objects available on the internet, such as the medieval bell shrine of St. Conall Cael from the British Museum.

Other uses for these models

Some of these models have been produced using laser scanning techniques in addition to more standard ‘photogrammetry’.  This works by capturing the returns from laser pulses sent out by a scanner rather than just using conventional photography.  It allows for a very high degree of accuracy.  Models produced using laser scanning can be used to look for tiny changes in structures over time that might indicate emerging structural problems and they can also be used to document sites that may be at risk of destruction by erosion or other processes or events in the future, such as, for example, at Dunbeg Promontory Fort in County Kerry.  All these capabilities mean that these cutting-edge technologies, though not a substitute for the experience of an actual visit, are likely to play an important role in the future in recording and monitoring sites and objects, as well as providing greater access to a wider audience.